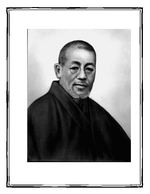 Founder of
the Reiki System of Healing

"In March 1922 Usui Sensei’s personal and business life was failing. As a sensitive spiritualist, Usui Sensei had spent much time meditating at power spots on Mt. Kurama where he had received his early Buddhist training. So he decided to spend some time on this holy mountain to see if he could discover a solution to his personal problems; he was not seeking to discover a method of healing as some have said. He enrolled in Isyu Guo, a twenty-one-day training course sponsored by the Tendai Buddhist Temple located there. We do not know for certain what he was required to do during this training, but it is likely that fasting, meditation, chanting, and prayers were part of the practice. In addition, we know there is a small waterfall on Mt. Kurama where even today people go to meditate. This meditation involves standing under the waterfall and allowing the water to strike and flow over the top of the head, a practice that is said to activate the crown chakra. Japanese Reiki Masters think that Usui Sensei may have used this meditation as part of his practice. In any case, it was during the Isyu Guo training that the great Reiki energy entered his crown chakra. This filled him with tremendous spiritual light and he received understanding about how to solve his personal problems.

When this happened, he was filled with excitement and went running down the mountain. On his way down he stubbed his toe on a rock and fell down. And in the same way anyone would do, he placed his hands over the toe, which was in pain. As he did this, healing energy began flowing from his hands all by itself. The pain in his toe went away and the toe was healed. Usui Sensei was amazed by this. He realized that in addition to the illuminating experience he had received, he had also received the gift of healing."

~ from What is the History of Reiki? by Willam Lee Rand, The International Center for Reiki Training

One of several Reiki masters Dr. Usui initiated prior to his transition. Current historical research indicates that his contribution to Reiki in the West is that he trained Mrs. Takata which in turn enabled her to bring Reiki to the West.

Mrs. Hawayo Takata brought Reiki from Japan to the West in 1937 and continued to practice and teach until her passing in 1980.
Reiki With Louise
Louise St.John, Reiki Master/Teacher
Animal Reiki practitioner
Sacred Childbirth with ReikiTM practitioner
Placenta Encapsulation Specialist